Banking Sector Outlook for India in 2021

2020 turned out to be a year of change for the global economy and the banking industry. As we entered 2021 on a positive note led by the massive vaccination drive against Covid-19, the aftermaths of pandemic are yet to be established fully. In India, the vaccination drive began in January 2021, yet its economy had started seeing some uptick signals since Oct’20 itself. The influence of the pandemic was somewhat adopted well by its citizens and the economic activity resumed at a much quicker pace than anticipated.

This positivity along with some relief measures which had already been provided by the regulators helped in building a stable health for the Indian Banks. The Indian Banks, which were struggling with their high Non-performing loans (NPL) even before Covid-19 pandemic were able to survive this pandemic in a very resilient manner. Let’s try and analyse what really helped the banks and going forward will the same strategies help in future survival of banks when the relief measures are withdrawn across the world?

The banking industry in India had been jostling with NPL issues since 2016 following the disallowance of any sort of restructuring in advances from RBI. The ratio peaked in the year 2018 to 11.18%. As the banks began to write-off all bad loans and began recovering some of their past dues, their NPL ratio began to improve. However, FY2020 came as another shock for the banking industry due to the slowdown and losses caused by the Covid-19 pandemic.

Indian banks managed to maintain their asset quality because of the relief measures provided by the Indian Banking regulator, Reserve Bank of India (RBI) as well as the Indian Government and the Supreme Court. The quick and bold measures like injection of liquidity, reduction in cost of funds, regulatory forbearance, consumption supporting stimulus packages, relief in loan default classification, instalment moratorium and other measures contained the immediate adverse effects of the COVID-19 pandemic.

A closer look at the NPL ratios reflect that the maximum NPLs of the system had been traditionally from the Industries sector. The retail sector which contributes almost equally as industry sector has a much lower NPL ratio compared to all other sectors. This is also the reason why banks credit growth has been much higher from the retail segment (9.9% as on Sep’20) than the industry segment (3.7% in Sep’20) (Refer Annexure 1)

Retail loans in India fall under the larger umbrella of credit given by financial institutions to consumers for their financial needs such as buying a house, paying for college education, owning a vehicle and personal loans etc. These loans by the virtue of their characteristics are small in quantum, spread across borrowers and have traditionally been the safest assets class. The borrowers include individuals or professionals who are mostly the salaried class.

Till Sept 2020, the growth in retail loans had slowed dramatically owing to the fall in private consumption by almost 33% due to fears of job losses, unemployment, slowing economy etc. However, in Oct-Dec’2020, the demand picked up again as the fears pertaining to Covid-19 moderated. Thus despite slowdown in demand, this sector still continued to be the demand driver for the banks growing positively as compared to other industries and services sectors.

One of the most important factors that led to the quick revival of this sector was the digital innovation drive held by the banks. Pre-pandemic, while most lenders relied on face-to-face interactions for customer engagement, the same changed to a complete digital model, during Covid times. The whole interaction process from sourcing to disbursing has undergone a transformation based upon an intelligence driven analytical and digital system.

The earlier hesitant customers also began accepting these changes making way for a new and a wider participation from all citizens towards inclusive banking. Thus the lenders methodology to provide credit led to an increased participation from retail customers which also aided banks in increasing their focus towards this segment as compared to other sectors.

Another factor that the Indian banks began to concentrate their energies towards retail loans was due to their non-toxicity. As cited above, the retail loans have traditionally witnessed the lowest NPLs across banking making them the most innocuous assets class for lending. While, it was expected that the impact of corona virus will negatively hit the retail portfolio too but most of the banks have reported and are witnessing a much lower number than anticipated. To quote Mr. Sumit Bali- head retail banking Axis Bank, “Given the fact that lot of people lost their jobs, some had to take salary cuts, some industries were badly affected that will have some impact on delinquency and portfolio collections. But these numbers are much lower than what we had anticipated.”

One of the reasons cited by banks on low bounces within this segment is also because of the digital collections mechanism and electronic collections systems which were already in place and used by them. Post lock-down, many customers who were earlier using cash and cheque modes for repayment of installments shifted to these digital modes aiding further in improved recoveries. This digital shift is now a process in itself which will remain forever.

It has also helped lenders in predicting the default patterns in advance and minimize payment declinations by periodical review of the data stored on these platforms. The technology push has lowered the banks overall costs and increased their market competitiveness.

Expected Performance from 2021 and Beyond

As we enter into 2021, with a new hope from the vaccination drive the tests continues to remain challenging for the banks. The pandemic has ushered in several structural changes in consumption patterns and business operations, the impact of which is still unfolding.

Going forward, the regulators will begin withdrawing the loan reclassification related relief measures which will likely impact the balance sheets of the banks somewhat negatively. On the back of it, the not so reckless credit growth can act as a dual blow for the banks. However, given that most banks have already provided additionally for these expected bad debts, the negative effect will not be too high. Moreover, since most banks have already undergone their digital transformation, it will help in further stabilising the Indian Banks. Furthermore, the recent shoring up of capital by the Indian Banks is likely to benefit them positively building a strategic path towards their future growth. 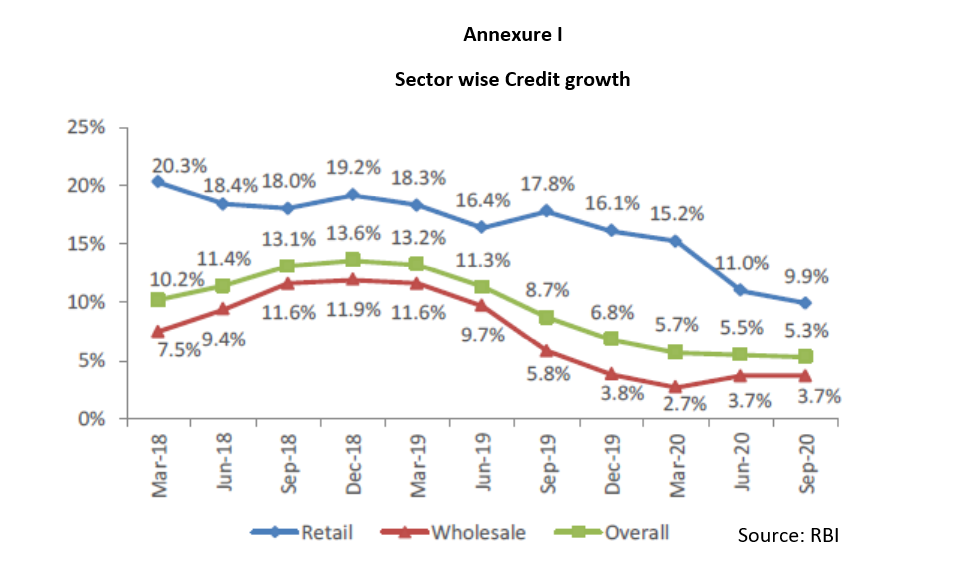 The State of Non-Performing Loans in Indonesia

Financial Literacy as a Gateway to Financial Inclusion

The Road Ahead for Credit Markets in Asia