Asia is home to one of the largest consumer markets and still growing. A $10 trillion consumption growth opportunity is on offer as the market changes dynamically with new growth angles. The huge consumer market is also the catalyst fueling the credit industry, which is trying to bounce back after being hit hard by the disruptions triggered by the COVID-19 pandemic.

Over the next decade, consumers in Asia will account for more than half of the global consumption growth. As more people join the consumer class, spending more than $11 a day, new, and more innovative financial services are expected to come into play.

Digital ecosystems are expected to be at the heart of the credit industry and are expected to fuel consumer market growth. The development of super apps that offer a one-stop shop for a range of financial services will be crucial to the credit market expansion.

While super-apps in the financial sector first emerged in China, Indonesia, India, and Vietnam are currently home to some of the leading supper app players in the region. Banks in the regions are increasingly integrating embedded finance plays and banking-as-a-service platforms as they seek to strengthen their competitive edge in the credit market.

One of the biggest trends in the Asia credit market is the proliferation of e-wallet providers, credit card providers, and technology companies. The new entrants to the credit market are increasingly offering unique solutions that have enhanced access to loans and capital.

However, traditional financial service players still account for the biggest share of transactions in the market. Their competitive advantage stems from the fact that consumers still trust them more than the new entrants into the business. The McKinsey 2021 Personal Finance Survey indicates that traditional financial service boasts of the highest levels of trust at between 70 to 75%.

India’s credit ecosystem has remained resilient despite feeling the full brunt of the pandemic. The industry almost came to its knees as the pandemic disrupted various aspects of the burgeoning economy resulting in thousands of people losing their jobs. Provision for bad debts in the financial sector increased at the height of the pandemic as most people were rendered jobless and unable to refinance their loans.

As it stands, the Indian credit industry is expected to grow at a higher rate than most major economies globally. The growth will mostly be driven by a shift in the country’s demographic, burgeoning affluent middle class, and ramping up of private consumption. Growth in rural populations catalyzed by technology is another factor expected to fuel growth in the credit industry.

There has been a significant gap in accessing formal credit in India for the longest time. Fast forward, technological advancement has seen banks and other financial institutions develop new products and solutions for filling the gap.

New payment products and instruments designed to make it easier for people to access formal credit have cropped up. While formal credit was traditionally restricted to home, auto, and personal loans, things are slowly changing. 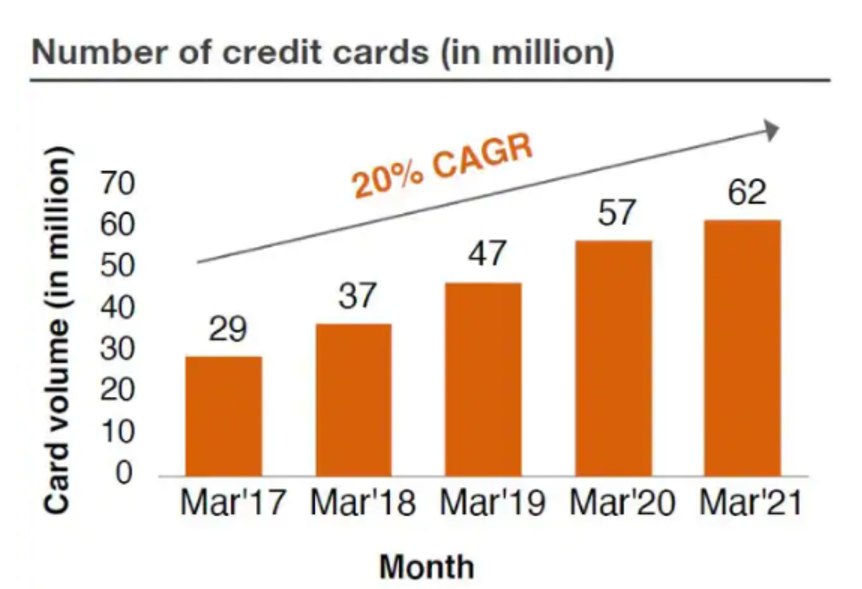 Over the last four years, issuance of credit cards has increased at a compound annual growth rate of 20%. The number of people with credit cards more than doubled to $62 million as of the start of last year. While the pandemic slowed the growth rate to 7%, things are once again looking up fuelled by issuance in large banks. Credit card transactions in India have also been on a roll increasing at a 16% CAGR  as of last year. While the growth rate did slowdown in the first half of last year, it appears to have picked pace as the year came to a close.

Indonesia’s credit industry is also in a recovery mode in the aftermath of the economy coming under pressure amid the shackles of COVID-19. Recovery of business activity has been the catalyst fuelling lending activities in the sector.

However, unlike India, where the credit market is highly diversified, the Indonesian industry is mostly dominated by large commercial banks. The banks primarily focus on lending to top-tier corporates. In addition, the loan products are very basic.

Amid the challenges, the domestic credit market was on a roll growing by 8.7% in November of 2021, reaching highs of $511.6 billion. Money supply in the economy, on the other hand, increased year-over-year to over $528 billion.

Improved economic conditions owing to the easing of the pandemic disruptions were also a factor behind the tremendous growth registered in the Vietnam credit industry last year. With the country’s GDP growing at about 5%, nearly double the 2.9% growth recorded in 2020, credit growth is believed to have expanded by about 14%. Fitch Solutions had initially projected the country’s GDP to grow by about 8.6% in 2021. Nevertheless, the growth appears to have slowed owing to the tourism industry not recovering in time, to pre-pandemic levels

Bank credit continues to grow for the better part of the year despite the country facing the fourth wave of the pandemic. The growth can be attributed to the country’s central bank making monetary policy more flexible. Consequently, people and businesses were able to access cheap loans from the credit market to finance various economic activities.

The central bank directing commercial banks to delay debt repayment and to consider lowering or scrape interest rates on customers affected by COVID-19 also accelerated expansion of the Vietnam credit market. Last year more than 600,000 Indonesians saw interest rates on their debts scrapped off with a total outstanding loan of about VND1 278 trillion.

This year, the Philippines ‘ banking system is expected to bounce back to growth after two years of slow growth due to disruptions triggered by the pandemic. Fitch Ratings in a research note indicates that the country’s financial sector is showing signs of improvement.

Last year domestic credit in the country grew to hit a high of 7.5% in November.

Loan growth continues to accelerate attributed to business and consumer spending resumption. The credit rating firm expects loan growth to grow by 8% this year, affirming the expected growth of the credit industry up from a projected 3% growth

In addition, the credit rating firm expects banks in the Philippines to register higher loan growth rates on the economy recovering more quickly than initially anticipated.

Over the next few years, the Asia credit market is poised to undergo a massive transformation. New trends fueling how people access and make payments have started taking shape and having a ripple effect in the entire ecosystem.

The wallet as a medium is slowly being phased out despite being in existence for decades. Hygiene concerns amid the pandemic have seen most people in Asia resort to contactless payment systems. The contactless base has grown by over 20% over the past two years, with most people resorting to e-wallets.

As digital wallets become the preferred form of payments, the credit card market could experience a massive transformation. Credit card use could decline as more non-bank professionals give e-wallets the nod, thanks to smartphone proliferation.

The use of QR codes which tend to be much easier and more cost-effective could also have a ripple effect on the sector. While developed markets have developed tap-and-go payments systems, the system is slowly finding its way in developing markets of Indonesia, the Philippines, and India.

Banks and financial institutions that integrate robust digital transformation systems stand to be the biggest winners in the credit markets.

Connected commerce has also given rise to new revenue opportunities and payment solutions. It has also led to lower merchant discount rates and settlements and shifting revenue from issuers to acquire.

Another trend gathering pace in Asia financial sector is the cashless economy. While physical cash is not expected to disappear completely, its handling is expected to decline across the region. In western economies, cash use has declined by about 30%.

The role of ATMs is also expected to diminish as people resort to digital payments. Digital currencies remain a long-term play as part of the ongoing transformation. Distributed ledger technology powering most cryptocurrencies is increasingly gaining traction in the region.

Cross-border revenues have been rising and are the biggest contributor to Asia’s growing payment sector. Between 2011 and 2019, the revenues increased by an average of 6%. As economies bounced back from the pandemic, the payments are expected to increase significantly.

A wide pool of credit providers dominates the burgeoning Asia credit market. The degree of market fragmentation is characterized by over 150 e-wallet licenses already issued. However, with venture capital becoming more difficult to attract, some players may struggle to stay afloat and could end up being absorbed by bigger and more stable players.

Deleveraging of Debts: How can this improve the Credit Ecosystem