The global COVID-19 pandemic has emerged as an unprecedented event that required extraordinary measures from governments across the world to re-ensure economic stability. As the immediate containment of the virus requires firm measures of quarantine, isolation, social distancing, this has disrupted world economy in a groundbreaking manner. With the vaccination drives that commenced at the beginning of 2021, the global situation and economic activity is predicted to improvise.

However, the second and third waves of the virus in many countries has dampened the mood, and Asia is not excluded in this adversity. The recovery which began in the beginning of is expected to be delayed yet again. The easing and the relaxation methods imposed by Central Banks like fiscal stimulus, lower interest rates, tax incentives, government guarantees, subsidies, mortgage holidays do not look like to be withdrawn anytime soon in the near future.

This brief report analyses the impact of this grave situation on the four economies and the banks in India, Indonesia, Philippines and Vietnam in the next two quarters. 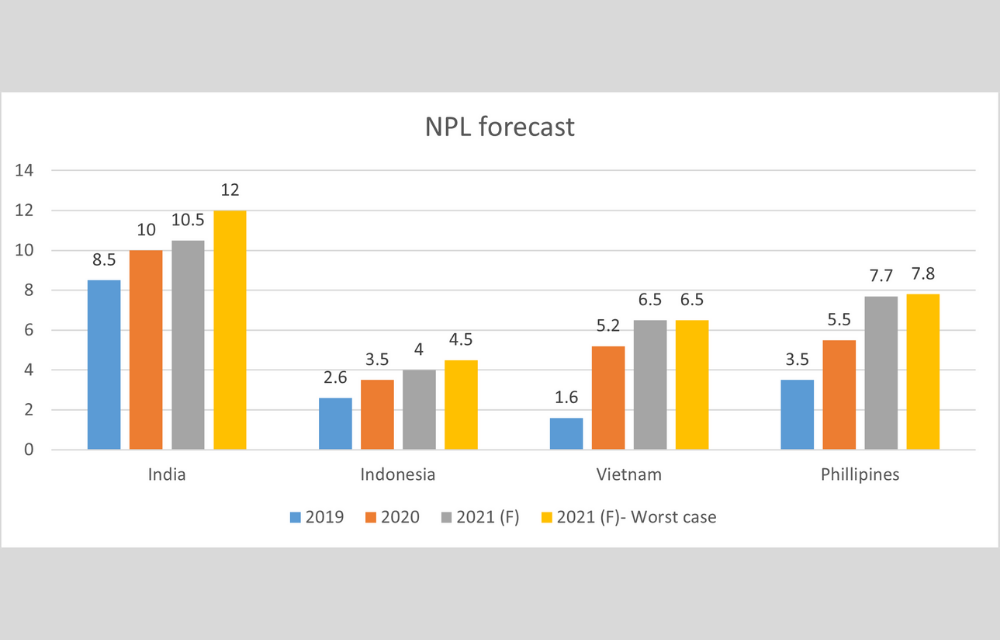 Towards the end of Feb 2021, Indian economy had begun to recover strongly from the first wave of the virus and was on a growth trajectory. However, in April 2021, the second wave caught the country in its grip so intensely, yet the country did not go for a nationwide lockdown, most of the states restricted movements, business activities and imposed local level lockdowns and curfews. The economic activity came to a complete halt in the following two months. Job losses, unemployment, reverse migration all became a hallmark features of Q22021 for the country.

The Indian banks which were already reeling under pressures of NPLs, had to bear another shock. The credit growth that was already muted to 6% from April 2020 to March 2021 (lowest since last four years), was almost nil in Q2 (April’21- Jun’21). it is expected to further nose dive in the next two quarters. Coupled with this, the asset quality is likely to deteriorate additionally by 1.5-2%.

“The second COVID wave does bring along fresh headwinds for the banking sector especially if a strict lockdown is imposed,” said Radhika Rao, an economist at DBS Bank. “As it stands, accretion of bad loans to the banking system is estimated to rise by 1.5%-2% by mid of this year.”

The shock this time is estimated to affect the informal economy, retail businesses and individuals much severely than the larger corporations. This balance sheet weakness is likely to contribute to incremental NPLs for Indian banks which are already at 11-12% of gross loans. the RBI in order to reduce the aftermath allowed an extension in moratorium to borrowers till Sept 31, 2021.

Indonesia is among one of the hardest hit countries by the pandemic in Southeast Asia. Indonesian economy commenced recovery in 2021, but growth in 2022 is expected to be much stronger. However, the key to this recovery will be the rise in international and domestic trade, fast vaccination processed and increased government spending.

The Indonesian banks have been faced with a double whammy of reduced interest rates and elevated credit costs leading to declining NIMs. As against 5% loans restructure pre covid, about 18% of systemwide loans have been restructured due to COVID-19. The regulatory forbearance that allowed restructured loans to be classified as performing until end-March 2022 has mitigated damage to bank financials.

However, given that Indonesian banks have a reasonable Tier1 capital buffer of 23%, it provides some relief to their future.

The Vietnam economy was one of the least impacted economies due to Covid pandemic growing by 2.9% in 2020. Before the recent coronavirus cases, Vietnam’s trade growth reached a 10-year high of $207 billion in the first quarter of 2021, an increase of nearly 30 percent compared to the same period last year.  As per S&P as well as IMF, its growth was expected to rebound to 6.0%-7.0% growth from 2022 onwards.

However, the country saw a second wave resurge in April, 2021. Given this surge, it is likely to have a high impact on the tourism based economy.  This wave is likely to have an impact on the banking sector in the form of further deterioration in asset quality. Though the regulator has allowed forbearance and has eased loan provisioning and classification easing, the impact can be still considerable.

For Philippines, which faced the worst economic outlook in 2020 with a 9.2% fall in GDP, the year 2021 will only be positive in case of a strong vaccination rollout program. The IMF expects Philippines economy to grow by 4.9% in 2021 as against earlier projection of 5.2%. the country is highly dependent on SME, consumer and micro loans which are expect to deteriorate further.

Asian economies have definitely been affected by the resurgence in the infection. Some economies had to undergo a second lockdown that has surely impacted the debt-servicing ability of borrowers. The future extent of revival in economic activities as the restrictions are eased will drive the final impact on asset quality of banks. Significant new outbreaks or delayed vaccine rollouts could prolong disruptions to mobility and economic activity, deepening the crisis in some economies.

Deleveraging of Debts: How can this improve the Credit Ecosystem